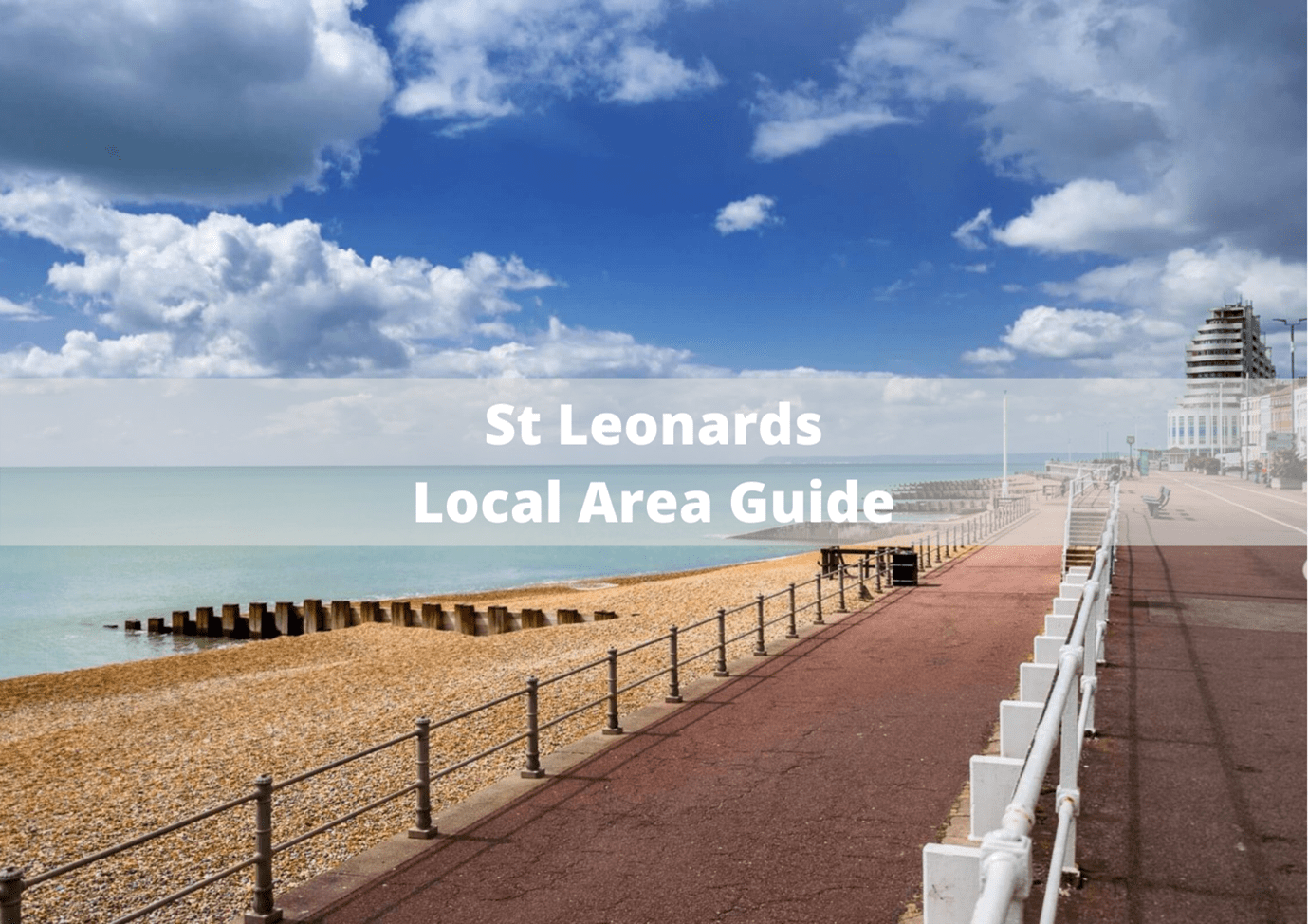 The original picture postcard Regency seaside town, St Leonards was planned as a purpose-built resort for the wealthy during the Regency period.
Planned and built by renowned architect James Burton, St Leonards became a family affair as Burton’s son, Decimus, took over the task after his father’s death.  Burton Senior had long cherished a vision of a coastal town and had perfected his craft in London working on the beautiful buildings of Bloomsbury and Regents Park.
St Leonards-on-Sea has been part of the Borough of Hastings since the 19th century and became a fashionable seaside resort occupied by royalty including Princess Victoria and the Duchess of Kent who stayed in the town for the winter of 1834-1835.
Sitting next to Hastings and fifty miles south of London, St Leonards still retains its own unique identity. The mile-long promenade has fabulous coastal views and looks back on this pretty peaceful location. If you want to read about the town, try the novel, 'Separate Lives' published in 2012 and set in Random-on-Sea, a seaside town inspired by St Leonards. Written by author, Kathryn Flett, who describes herself as the original DFL – Down from London and exactly what Burton envisaged when he built the resort – this story has all the flavour of life in St Leonards.
Now bustling with boutique shops, independents and vibrant cafes, St Leonards has developed a real vintage vibe but still retains that pretty, peaceful feel that Burton envisaged all those years ago.

If you want exquisite Regency style, then head for Burton St Leonards with its tall stucco-fronted colonnaded terraced houses examples of which can be found in Warrior Square and the surrounding roads. There are also the original waterfront Regency homes on the Marina and Grand Parade with leafy avenues rising up the hill behind.
Head east a little towards Hastings, and there are some quality mid-Victorian houses around Warrior Square, and later Victorian homes in Pevensey Road and Filsham Road and many of these houses have fine views. Past the artist’s quarter, there is a selection of homes from the 1800s, historic and charming with plenty of original features. Silverhill is the place to go if you are looking for a 19th-century townhouse. There are a handful of Arts and Crafts properties following the Edwardian expansion and even some original Art Deco apartments in Marine Court, notable for being the tallest block of flats in Britain at the time when it was built in 1937. Smaller mews style homes can be found in the Burton conservation area.
There are lots to choose from if you are looking for a flat as plenty of the substantial seaside villas have been converted into spacious and elegant apartments, many with fabulous sea views.
It is still possible to grab a bargain in St Leonards, but it is becoming more and more popular as an affordable alternative to Brighton. Properties in St Leonards had an average price of £262,139* over the last year, and the majority of sales were flats selling for an average of £164,265. Semi-detached houses had an average sale price of £276,584 with detached properties reaching £386,178.  These prices were 8% up on the previous year and 9% up on the 2018 peak of £239,442.
The average monthly rental price in St Leonards is £962**.

St Leonards has a population of just under 10,000 with 61% of the population aged between 16 and 64 and around 20% aged over 65***
Despite its seaside location, St Leonards is not really viewed as a popular retirement location. It has a diverse and vibrant community with a young feel. This trend continues to develop as families and couples are attracted by affordable property prices, good transport links and the fabulous location.

Schools and Colleges in St Leonards

Robsack Wood School on Whatlington Way is currently the most popular primary school with its ‘Outstanding’ OFSTED rating. Also favoured by parents are St Mary Star of the Sea Catholic Primary and Christ Church C of E on Woodland Vale Road both of which were rated ‘good’ by OFSTED and West St Leonards Primary Academy on Harley Shute Road which had the same OFSTED rating in 2016. St Pauls Church of England Academy is smaller with a lower roll and an average of 24 pupils per teacher.
For secondary education, St Leonards has two choices, both with 'Good' OFSTED ratings. The St Leonards Academy is the largest with 1,300 pupils, and their last inspection rating was in 2017. The other school is Saxon Mount which caters for children with special educational needs and is located on Edinburgh Road.
The nearest independent school is Battle Abbey at Battle, a co-educational school taking pupils from nursery to eighteen years.

The coast is obviously a huge attraction at St Leonards, you do not have to go far for year-round family fun. Stray a little towards Hastings, and you can visit Hastings Castle, a ruined 11th century Norman fortress. For some outdoor fun away from the seaside, visit Alexandra Park with lovely walks and diverse wildlife. The lower park has a boating lake, traditional bowling green, adventure playground and family cafe. The upper park has tennis courts and formal gardens plus some natural woodland areas and a miniature railway which will be a 'must-see’ for the children.  Other family friendly activities include the underground Source Park, a skate/bike park and Clambers Children’s Play Centre.

St Leonards has developed a reputation as a designer boutique shopping destination.  Independents, art studios and tempting cafes jostle with fashion emporiums, beauty shops and vintage clothing. There are artisan bakers and world cuisine foods shops, plus designer markets and fairs.
One essential location is Norman Road which sits just behind the seafront with furniture shops, art galleries, vintage clothing boutiques, old-fashioned haberdashery shops and the Kino-Teatr, an independent cinema.  Wander down Kings Road for an increasing variety of independent traders and cafes.
There are plans for a multi-million pounds sports complex to be built in St Leonards including a 3,000-capacity football stadium and a cricket pitch plus four indoor sports halls and gym for public usage.

Pubs and Restaurants in St Leonards

With all the designer and independent shops in St Leonards, you can be sure there are also plenty of sweet tearooms and vibrant coffee shops. Head to Goat Ledge on the beach at the bottom of Warrior Square for local fish in baps and tasty salad or for something more formal, St. Clements Restaurant a trendy bistro with a Michelin star has plenty of locally caught seafood on offer. Graze on Grand offers fabulous sea views and a stylish Italianate interior.  Along the seafront you will find La Bella Vista, a very popular, award-winning Italian restaurant.  For something casual, head to Half Man, Half Burger.
Farmyard has something for everyone, this restaurant, wine bar and wine shop is well worth a visit specialising in local produce and natural wines.  Expect fantastic seafood as well as excellent local cheeses. Sustainability is king at Farmyard.

Developers Gemselect has a fabulous new offering in St Leonards treading in the footsteps of Decimus Burton. This planned development is a mix of new and refurbished properties just five minutes from the seafront and will be the largest new development in St Leonards since the town was built.
Sited at The Archery Ground, this is a former quarry used by the Royal St Leonard’s Archers in the 19th century before being turned into a garden and then transforming into the site of Hastings College of Art and Technology in the 1950s.
The new scheme will provide a beautifully landscaped garden square at the heart of Archery Garden with six restored villas and apartments and 97 new homes ranging from one-bedroom flats to four-bedroom homes, all designed in that neo-classical style to complement the surrounding area and many with fabulous sea views.

St Leonards has two train stations, St Leonards Warrior Square and West St Leonards which take you to Charing Cross in around 1 hour and 40 minutes via Tunbridge Wells (35 minutes) and Sevenoaks (60 minutes) or direct to London Victoria in 2 hours. There are links to Gatwick Airport, which is 90 minutes away.  Equally, in the other directions, there are easy links to Ashford International, Brighton and Hastings.
There are current proposals to connect nearby Hastings to London with a new high-speed rail connection; this will halve the journey time to the capital to just over an hour.