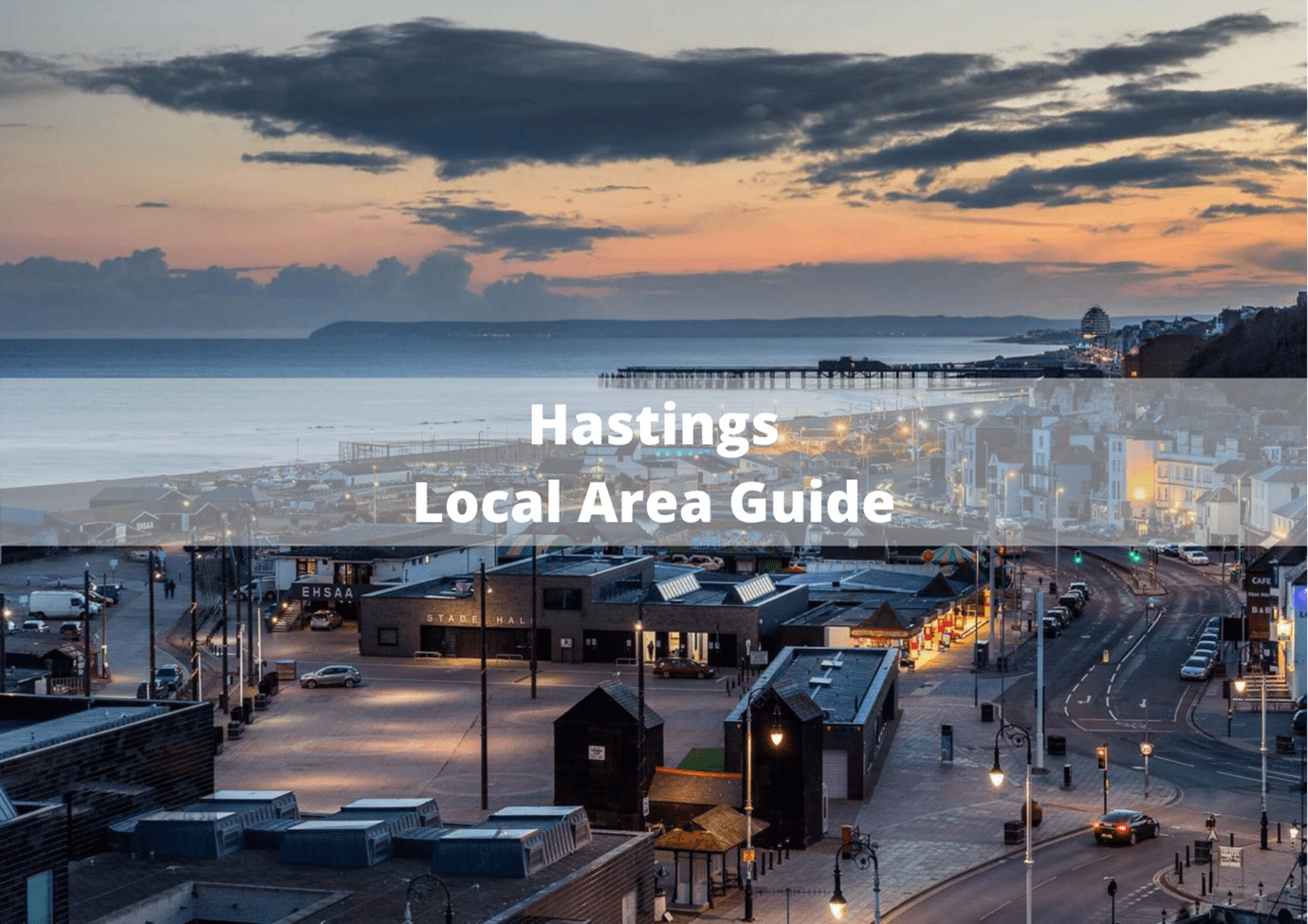 William the Conqueror founded Battle Abbey as penance for the lives lost in the Battle of Hastings of 1066. Hastings also has a ruined Norman castle which was home to the conquering Frenchman. Hastings is a Cinque Port, one of a series of historic coastal towns in Kent, Sussex and Essex formed for military and trade purposes; now just a ceremonial title remains. With the arrival of the railway in the 19th century Hastings became a popular seaside resort, especially for Londoners. Its population grew from around 3,000 in 1801 to 60,000 by 1891.
Hastings now has the largest beach-based fishing fleet in Europe located at an area called The Stade. It has suffered over the years from the lack of a natural harbour. There was an attempt made to build a stone harbour during Elizabeth I's reign, but the foundations were destroyed by the sea during severe storms. Subsequent attempts have also tried and failed, which is why to this day, the fishing boats are still launched from the beach.  The unique Net Huts along from The Stade are a local landmark, originally built to provide weather-proof stores for fishing gear which had to be built upwards due to space restrictions, resulting in their unusual height.
Between 1903 and 1919, Fred Judge photographed many of the towns’ landmarks, events and disasters including storms, the earliest tram, and the pier fire of 1917. Most of these images were produced by the postcard manufacturing firm he founded still known today as Judges postcards.
The setting for the popular television drama, ‘Foyles War’, Hastings was also home to the television inventor John Logie Baird. More recently, Alan Turing of Bletchley Park fame and the comedian, Jo Brand.

As Brighton and Eastbourne increase in price, Hastings offers an affordable alternative and it is still possible to buy a property for under £100,000. There are flats, studio apartments and mobile homes available whilst at the other end of the spectrum spacious and supremely stylish sea-fronting villas arranged over several floors, plus everything in between.
Hastings Old Town is a popular destination for buyers looking for something period and quirky and is just fifteen minutes’ walk away from the new town. It has a bohemian and arty feel and is home to many artists and designers.
There are new builds in the town from all the major housebuilders and plenty of shared ownership schemes available for those that fit the criteria. If you want Regency style then head to St Leonards, adjacent to Hastings and which has a range of iconic houses and apartments spanning the last two hundred years - many with fabulous sea views.
Properties in Hastings had an average price of £255,770* over the last year. Over the previous twelve months, the majority of sales were terraced homes reaching an average sale price of £246,983.  Flats sold at an average of £158,896 and semi-detached properties fetched £289,577. In Hastings, prices were up 6% overall on the previous year and 7% up on the 2018 peak of £238,226. The average monthly rental price in Hastings is £750**.

Hastings has a population of just over 90,000*** with forty years old the average age of the population.
Hastings is not perceived as a seaside retirement location like other towns along the south coast. The regeneration projects have brought in more young people and families attracted by the town's redevelopment and affordable house prices. It is also still popular for London relocators, particularly small businesses priced out by high rents and lack of space.

Schools and Colleges in Hastings

There are six primary schools located across Hastings and St Leonards which have been graded ‘Outstanding ‘ by OFSTED. Four are located in St Leonards, but the two in central Hastings are Ark Blacklands Primary Academy and Torfield School in Croft Road. There is a popular Catholic primary called Sacred Heart in Old London Road.
There are five secondary schools in Hastings, three of which have been converted into academies: Filsham Valley, The Grove (a specialist maths and computing school) and Hillcrest. The other two, William Parker and Ark Helenswood are more popular but for the strongest academic reputation and OFSTED grading, look to Claverham Community College in Battle and St Richards Catholic School in Bexhill-on-Sea short distances away.
East Sussex College, situated just outside Hastings station, provides a wide variety of further education and vocational options.  It has other campuses in Eastbourne, Lewes and Newhaven.
Prominent amongst the independent schools in the Hastings area is Battle Abbey School and Buckswood which is at Guestling five miles from the town.

New Hastings Pier with its colourful beach huts is perfect for a stroll or head to St Leonards for a beautiful view and all the peace and tranquillity of this classic Regency seafront. St Leonards is considered part of Hastings but certainly has its own character and identity and is full of quirky independent shops, boutiques, restaurants, and cafes.
Enjoy East Hill Cliff Railway, the UK’s steepest funicular railway which runs up to Hastings Country Park with fabulous views over the English Channel plus 850 acres of nature reserve for keen walkers.
Hastings nautical heritage is everywhere, and for keen historians, you have a choice of the Fisherman’s Museum housed in the old Fisherman’s Chapel and the fascinating Shipwreck Museum with a range of displays and exhibits taken from wrecks in the Channel.

Shopping Facilities and Leisure in Hastings

Shopping in Hastings is split between the new town with a modern shopping centre called Priory Meadow with plenty of parking, and the Old Town where there are lots of independents and quirky boutiques in a period setting all linked by pretty lanes and narrow passages. Hastings Old Town has become a popular haunt for designers and artists and has a real bohemian vibe.
There are two theatres in the town, the White Rock Theatre and the Stables Theatre. The White Rock hosts the annual pantomime and comedy, music and dance acts whilst The Stables stages local productions and is home to an art exhibition centre.
There is a small four-screen Odeon cinema in the centre of town, but there are plans to build a new multiplex as part of the Priory Quarter development.  There is an independent cinema in the Old Town called The Electric Palace, and a restored cinema in St Leonards called the Kino-Teatr.
For outside green space, Hastings is blessed with lots of lovely parks the most popular of which is Alexandra Park which offers beautiful walks and lots of wildlife plus a boating lake, adventure playground and family cafe. There are also tennis courts and a miniature railway.

Pubs and Restaurants in Hastings

Hastings and St Leonards are a paradise for foodies with colourful restaurants, cafes and bars throughout the new and old towns and St Leonards.
No seaside location is complete without a plate of traditional fish and chips.  Enjoy a dish of the very best at Maggie's Fish and Chip Restaurant in Rock-a-Nore Road.  For a those who enjoy surf and turf, head to Whites Seafood & Steakbar on George Street.
Home to various world cuisines, try Mamma Putt in Kings Road, a contemporary restaurant serving African and Caribbean cuisine. If you fancy a traditional pub, then The Crown situated in the old town will not disappoint. It has a fabulous location at the bottom of the country park and just a pebble’s throw away from the beach.
Hastings is extremely proud of its live music scene.  The Albion and Porters both have regular music evenings where you can enjoy a drink and a meal while listening to some jazz.

There are plans to develop the Priory Meadow Shopping Centre in the middle of Hastings to add more retail space and include leisure facilities such as a Multiplex cinema. This forms part of the area plan for regeneration and economic development in the town.

The town is served by Stagecoach buses that link to Bexhill, Eastbourne and Dover, there are also long-distance buses to Hawkhurst, Tunbridge Wells, Ashurst and Canterbury. Metrobus run a twice-daily service to Gatwick Airport, and National Express run a coach service to London.
Hastings has four railway stations if you include the area of St Leonards. There are two rail links to London, and the quickest route is to Charing Cross with the other destination being Victoria, both of which take about 90 minutes.
There are plans to extend the high-speed rail link from Ashford along the coast to include Hastings.