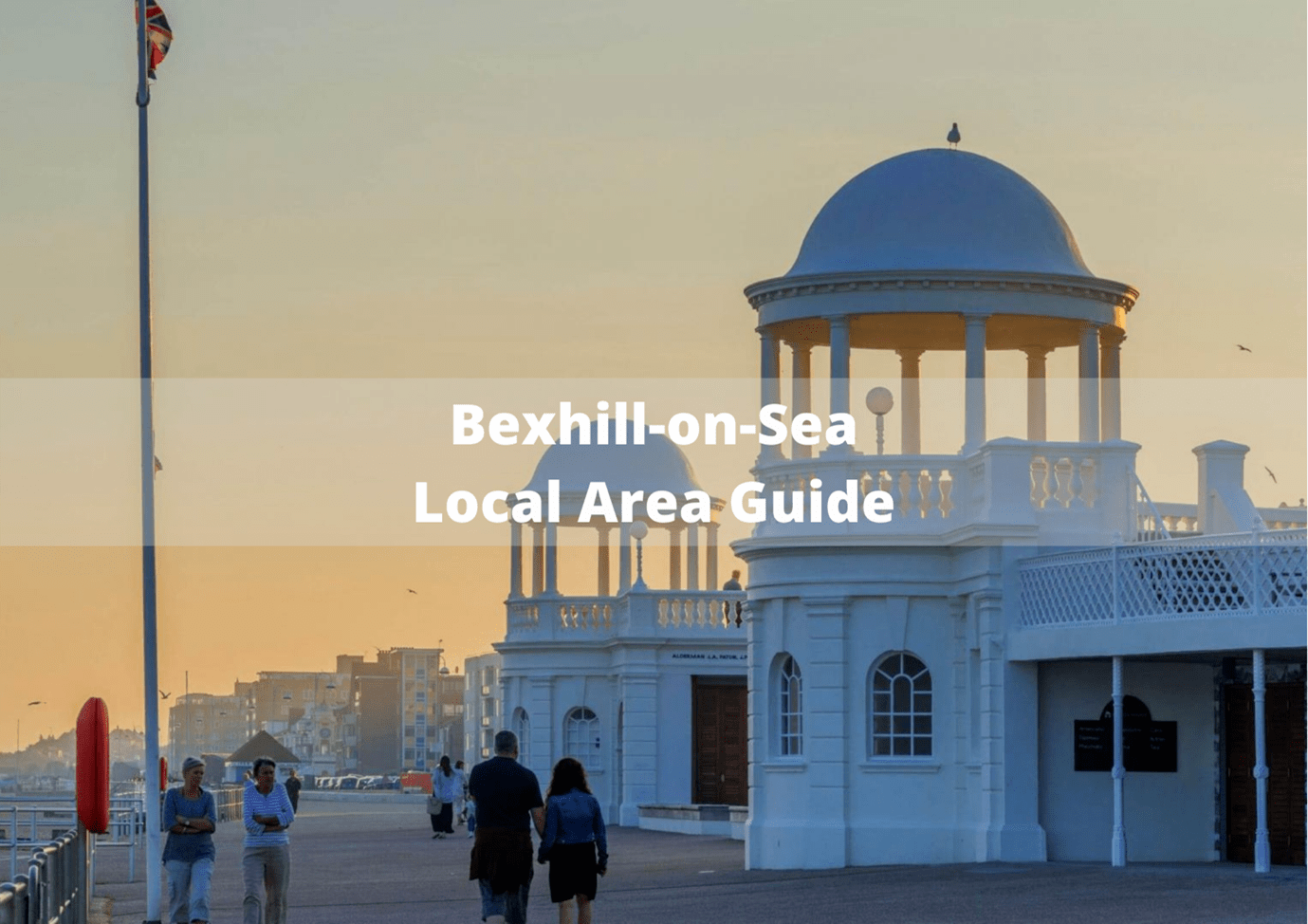 Bexhill-on-Sea is a peaceful coastal location and is the Victorian and Edwardian cousin to its Regency neighbour, St Leonards. Located between Hastings and Eastbourne, the town is primarily residential with a small amount of visitor and tourist traffic, far less than it would have known in its holiday heyday.
A popular resort in the 19th and early 20th century, Bexhill-on-Sea is filled with architecture from this period but actually has pretty ancient antecedents; the settlement was established in the 8th century when King Offa of Mercia built a small community on the site which was later mentioned in the Domesday Book. Much of it was destroyed by the Norman invasion in 1066.
Fast forward a few hundred years to the 1880s and Bexhill-on-Sea was promoted as a health resort by Earl De La Warr after whom the town’s famous pavilion is named. Like many seaside locations, it is experiencing a regeneration at the heart of which is the iconic 1930s De La Warr Pavillion and the newly renovated King George V Colonnade with gift shops, cafes and entertainment.
With a nautical history that dates back to Napoleonic times, Bexhill-on-Sea has many notable dates on its historical calendar. It was famous for hosting the first British motor race meeting in 1902 which became an annual event repackaged in more recent times as the Festival of Motoring held on the first Bank Holiday in May.
Bexhill-on-Sea was famous or infamous for allowing the first mixed bathing at the turn of the century. Legend also has it that Bob Marl

The key attraction for property hunters in Bexhill-on-Sea is affordability, especially compared to house prices in Brighton and the newly rediscovered St Leonards.
There are many Edwardian and Victorian homes to choose from in the centre of Bexhill-on-Sea, including large villas, spacious terraces and cosy cottages. The old town has a selection of classic Georgian properties. There are several 1930s and 1950s apartment blocks which offer a range of mostly two-bedroom flats.
The influx of younger families attracted by prices and the location has led to some new developments with plenty of three-bed homes. There is also a fine selection of bungalows and retirement properties both in Bexhill-on-Sea and nearby.
Properties in Bexhill-on-Sea had an average price of £301.687* over the last twelve months with the majority of sales being detached houses with an average of £411,459. Flats averaged a sale price of £173,604, and semi-detached homes fetched £284,471.  Prices in Bexhill-on-Sea were up overall around 8% compared to the previous year and 14% up on the peak of 2018, which was £265,535.
The average monthly rental price in Bexhill-on-Sea is £1,000** for a three-bedroom property and about half that for a one-bedroom home.

The population of Bexhill-on-Sea was recorded at just under 44,000*** in 2010, and 25% of the population fall within the age range of 45-64 years old. Around 13% are aged under 15 years. The 45-64 age group has experienced the most considerable growth in the town from 2001 to 2010, but the most recent population rise is in the over 65s age group.
Bexhill-on-Sea has a reputation for being popular with older people who want to retire to a home by the sea.  But in fact, Bexhill-on-Sea is also attracting younger families lured by keen property prices and quality of life plus the town's regeneration, which is creating a more youthful vibe.

Schools and Colleges in Bexhill-on-Sea

The majority of primary schools in Bexhill-on-Sea have achieved a ‘Good’ OFSTED rating.  One of the strongest primaries is St Peter and St Paul Church of England Primary on Buckhurst Road which received an 'Outstanding' grade at their inspection in 2015.  For children with learning difficulties and disabilities, there is the Glyne Cap School on Hastings Road also graded ‘Outstanding’ by OFSTED. This caters for children aged between 2 and 19 years.
For secondary education, choose between Bexhill-on-Sea High Academy rated ‘Good’ by OFSTED in 2017 and St Richard’s Catholic College which is one of the most popular secondary schools due to its ‘Outstanding’ rating in 2010. There is also a separate sixth form provision for those that want it with Bexhill-on-Sea Sixth Form College graded ‘Good’ by Ofsted.
The nearest independent school is Battle Abbey at Battle, a top co-educational school taking pupils from nursery to eighteen years.

At the heart of Bexhill-on-Sea is the De La Warr Pavillion which offers year-round entertainment including theatrical productions, art exhibitions, stand up comedians, live music and a range of workshops and classes – it really is a cultural hub.
For outdoor pursuits, Egerton Park has boat hire on a traditional boating lake, tennis courts and an outdoor gym plus an Olympic themed children’s adventure play area.  Bexhill-on-Sea also has a sailing club, a rowing club and a well-equipped leisure centre with an indoor pool. For golfing buffs, Bexhill-on-Sea has two of the finest golf courses in Sussex, at Cooden Beach and Highwoods.
For space and peace, visit the Combe Valley Countryside Park's tranquil setting, which covers just over two square miles of countryside located between Bexhill-on-Sea and Hastings. Open to the public for recreation, the park has two SSSIs – Sites of Special Scientific Interest – and plenty of wildlife. There is a network of paths for walkers and a new cycleway from Sidley through to Hollington. The central valley floods in the winter and is a haven for keen birdwatchers. The park also includes a two-mile stretch of coastline at Bulverhythe running from Galley Hill at Bexhill-on-Sea in the west towards St Leonards in the east.

Shopping Facilities and Leisure in Bexhill-on-Sea

Bexhill-on-Sea is a self-contained seaside town with a variety of independent shops and outlets. It has a unique and quirky character with a number of  individual shops, some new but many which have been there for years.
Bexhill-on-Sea still retains a mid-20th-century ‘olde worlde’ charm of model railway shops, wool shops and second-hand booksellers which have been there so long, they are now back in fashion. These local favourites are interspersed with new businesses like Starlings, an art and craft collective, in Sackville Road. Starlings is run by a collective of artists and is full of cards, prints, knits, ceramics, jewellery, and gifts to suit everyone.
Buy fresh fish to eat on the go or to take home at The Angry Whelk on the seafront or try a sweet treat at Sweets by the Sea also in Sackville Road, with a beautiful display of old-fashioned sweet jars in the window.
Bexhill-on-Sea shops are an eclectic mix of the old and the new, the quirky and the vintage, the old-fashioned and the independent modern. And for the routine necessities of life, head to Glyne Gap, located between Bexhill-on-Sea and St Leonards for Ravenside Retail and Leisure Park. This has all the usual big names including Tesco and Marks & Spencer and this complex also has a swimming pool and a small gym.

Pubs and Restaurants in Bexhill-on-Sea

Scattered between all the lovely quirky shops are some unique cafes, restaurants, and eateries. They all have their own individual style and focus on different cuisines, many offering local produce, particularly fresh fish.
For fish and chips, visit Athena’s or if you want to lunch with a view then try the Cafe Bar at the De La Warr Pavillion, for hot and cold food. The Bathing Hut is a cool kiosk on the seafront crammed with delicious home bakes, ice-cream and sandwiches and don’t miss out on a glass or two at Kerry’s Wine Bar where you can also enjoy a latte or even fish and chips and all with the most amazing views.

Most of the major housebuilders have a development in or around Bexhill-on-Sea. So if you are looking for a new build, then there is a fairly regular supply of new to the market homes or houses just a few years old on different sites dotted around the town.

Bexhill-on-Sea is well connected with decent travel links to London and other towns including Brighton (about an hour) and Hastings (10 minutes) and Eastbourne (about 25 minutes.
London takes around two hours, but there are moves afoot to develop a high-speed rail link from Bexhill-on-Sea to London by extending the existing connection from Ashford, which would take around 20 minutes off the journey time.
Bexhill-on-Sea is just an hour away from the Shuttle and the Channel ferry ports, and it takes a similar amount of time to reach Gatwick Airport.