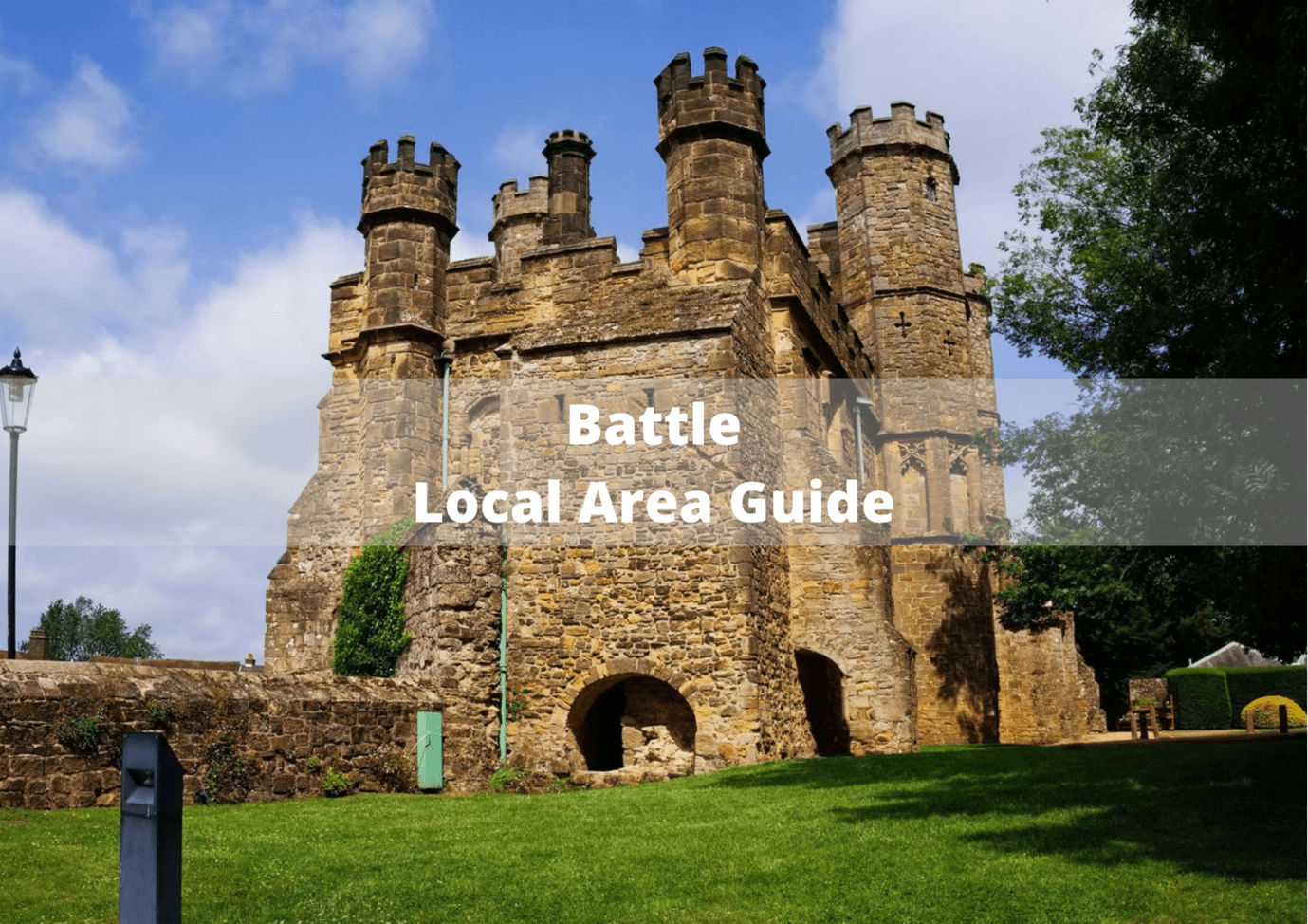 Located six miles from Hastings, Battle is a small market town with a significant history.  It takes its name from the Battle of Hastings, the site where the famous battle took place in 1066. Fast forward some 1,000 years and this charming market town has had more recent fame by being featured in the No. 1 album ‘Strangeland’ by Keane whose band members grew up in the area.
21st century Battle is a pretty and quaint Georgian market town with a grand Abbey built on the site of the battle by William the Conqueror on the Pope's wishes to honour the battle dead.
The town expanded hugely in the 17th century due to its prominence in the gunpowder industry. In 1722, Daniel Defoe, author of ‘Robinson Crusoe’ wrote of Battle, “It is remarkable for little but making the finest gunpowder, perhaps the best in Europe.”  The remains of the gunpowder works originally located in Powdermill Lane have since been converted into a country house hotel, a popular venue for weddings and functions.
The reasons for this explosive history have been lost in the mists of time. Still, Sussex was home to a thriving iron industry during the Elizabethan and Tudor period with a large output of cannons. Hence, it is perhaps logical that other industries might follow. For over two centuries, the area was the prime source of gunpowder for the British Army and the Royal Navy. Quieter now, Battle's connection to gunpowder is still celebrated on November 5th, with its popular Bonfire Night procession and fireworks which tempt crowds from across the county each year.

With its medieval antecedents, there are some incredible ancient cottages near the Abbey whilst the centre of town, and the High Street is full of Georgian period houses.
Larger detached Victorian villas can be found in North Trade Road and the area around the railway station has a mixture of late Victorian properties - terraced homes and cottages - and modern apartments.
Properties in Battle had an average price of £381,685* over the last year. The majority of sales were detached homes with an average price of £561,119 with semi-detached houses averaging £371,688 and flats, £148,646. The average monthly rental price in Battle is £855.77**

Battle has a population of around 7,000 people*** with an even spread across all the age ranges. It is a thriving community with good transport links, particularly to London, so it is a community which offers something to all age groups.

Schools and Colleges in Battle

Battle has several schools with an OFSTED rating of ‘Good’ or ‘Outstanding’. The Catsfield Church of England Primary School is a small rural school graded 'Outstanding' in 2013. In the centre of Battle on Market Road, is the Battle and Langton Church of England Primary awarded a ‘Good’ OFSTED rating in 2015.  Other strong contenders for primary education are Netherfield C of E, Crowhurst C of E primary school and Ninfield.
Battle is served by two secondary schools, Claverham Community College and Battle Abbey School, a top private school in the most spectacular historical setting. OFSTED confirmed that Claverham College provided excellent education with their ‘Outstanding’ OFSTED rating in 2013.

Battle Abbey is a big attraction in the area, and there is also the Battle Museum of Local History for keen history buffs. The Battle of Hastings is a big player in Battle's annual calendar. There are large celebrations and a re-enactment every October complete with falconry, archery displays and even military manoeuvres involving horses.
Bonfire night is another big Battle celebration, mainly because of the areas' historical connections to the gunpowder industry. But for some peace and quiet, visit Battle Great Wood with over 200 acres of mostly coniferous woodland and heath, an ideal escape for walking and cycling and a haven for wildlife and birds.
Sedlescombe Vineyard is England's oldest organic, award-winning vineyard set deep in the High Weald Area of Outstanding Natural Beauty and the heart of '1066 Country'. Well worth a visit for its fantastic location, take a guided tour or a self-guided stroll through the vines and the woodland. All tours include a tasting of Sedlescombe’s range of international award-winning wines.

Shopping Facilities and Leisure in Battle

Battle’s charming Georgian High Street is home to an increasing number of independent traders such as Dapper, Dickiebird Homestore, Taylors of Battle and British Design, British Made to name only a few. The Crafty Norman is not to be missed for arts and crafts equipment and home to ‘Battle Projects’.
Fresh produce can be picked up from The Greener Grocer, a modern take on the traditional grocers of old, collect your fresh meat supplies from either Butchers Hook or Battle Butchers and bread or cakes, baked daily on the premises, from Battle Bakes & Cakes.  For more generic grocery stores, visit Jempsons, Co-op or Tesco Express on Battle Hill.
Battle has a sports centre with a fitness gym and dance studio or why not try archery at Crowhurst Park Leisure Club which also has a gym and a pool plus health spa.

Pubs and restaurants in Battle

Battle’s pretty Georgian High Street is full of quaint cafes and tearooms to make your shopping trip complete. Enjoy a light bite or afternoon tea at Bonney’s or Battle Deli.  This small town is well-populated with pubs, all of which offer food – The Chequers, The Railway Tavern, The Kings Head, The Abbey and the newly opened Smoking Bull Inn and Thorpes Wine Bar & Gin Emporium.
Stray a little further afield to Great Park Farm Nursery at Catsfield with beautiful and attractive gardens - that is if you can tear yourself away from the fabulous homemade cakes and coffee!

Coming soon is a new development at Tollgates right on the edge of an Area of Outstanding Natural Beauty. Due to complete in summer 2021, this medium-sized development will have a mix of houses and bungalows. The bungalows will be two-bedroom, and the houses will range from two to four-bedroom.

Battle is fifty miles south-east of London and has good road links. The A2100 bisects the town from North to South connecting with the A21 to London, and Hastings and St. Leonards on Sea to the south.
Battle has its own train station with regular trains to London Charing Cross departing twice per hour. Local routes run to Hastings and its ongoing connections to Bexhill, Eastbourne and Brighton. Bus choices are plentiful with services to Hastings, Bexhill and the surrounding villages.
Battle is awaiting the outcome of a proposed upgrade to the High-Speed rail line from London with a project in the pipeline and the possibility of an extension from the current ‘end of the line’ at Ashford to a new stop at Bexhill via Hastings.  Construction is planned to finish in 2024. This would cut journey times to London to just over one hour from Hastings or Bexhill.